It’s hard to beat the Mass Effect when it comes to raw quality and the gameplay experience. The games that emerged from that series are some of the best action RPGs you can get your hands on.

This is because of their excellent dialogue, interesting story, and very satisfying gameplay mechanics. Since the series is so easy to play through, you might find yourself wondering what are the best games that are akin to the Mass Effect series.

Fret not, because we are here to clear all of the confusion and list some of the best games like Mass Effect 3 that are well worth your time. Please keep in mind that most of these games aren’t space-themed since we wanted to pack in as much variety as we could so you can be satisfied. They still fall into the action RPG genre and deliver some amazing experiences.

This interesting game places you on a special island set in the 17th century. You are a human that has found himself among many different creatures, other humans, as well as supernatural beings.

The natives of the island are in a constant state of conflict with invaders who want to seize the island for themselves. What’s interesting about this game is the diplomacy system, where you can choose which side you want to fight for, similar to the inFamous games.

Each choice you make can drastically change the outcomes of future events, so you need to be careful. Aside from that, you also have an interesting story coupled with intense, action-packed combat that will keep you on your toes. Once you get into Greedfall, you will find it difficult to put the game down!

Come on, you can’t click on a list of the best action RPG games and not expect this masterpiece to be in it. When it first came out, The Witcher 3: Wild Hunt broadened the scope of many more open-world games to come.

The story, characters, monsters, combat, GWENT, inventory, and the millions of side quests you can do are done so well that it is difficult to find something to dislike about the game. The story follows Geralt of Rivia, the White Wolf and protagonist of Andrzej Sapkowski’s novels.

He is on a journey to find Cirilla, his ward, and child of Elder Blood. Because of her special blood, she is the target of the Wild Hunt, a gang of dangerous beings that want to take over the world.

It is paramount that you find her before they do. However, to become strong enough to face the Wild Hunt, you must first journey across the lands in search of contracts to fulfill and people to help. Doing this will give you more experience and better gear, which is always useful. Pick up The Witcher 3 if you want a phenomenal experience.

One of the newest releases of 2022, Assassin’s Creed Valhalla has drastically changed the formula of Assassin’s Creed games, pushing them even more into the realm of fantasy and ditching a great deal of the stealth mechanics that have characterized the previous games.

If you’re a fan of the the Vikings TV show, you will notice some recurring themes and common ideas present in both that and the game. You play as Eivorr, an ambitious Viking warrior who invades England in search of power and riches.

You can control Viking raiding parties as you go out to capture points of interests, further improving your empire. Of course, there are many of the classic Assassin’s Creed elements present in Valhalla, and they are better than ever since the game is so modern. Definitely a game to consider if you’re looking for more games like Mass Effect 3.

Another timeless classic, Bioshock Infinite is a steampunk first-person shooter where you play as Booker Dewitt, a man who arrives in the fictional city of Columbia. Because of your arrival, it is assumed by the people there that you are a prophetic character that plans to overthrow Columbia.

They will try to stop you, at which point you will be placed in a situation similar to the Dishonored games, where you can freely roam the city and complete quests as they come to you until you complete the story. The general story is quite enthralling and high-quality, just as you would expect from the rest of the games in the Bioshock series.

While this game is not a direct sequel to previous games, instead taking place before them, you still can’t deny that Bioshock Infinite is a marvel and completely worth ten playthroughs.

Days Gone is an innovative open-world zombie game where you play as Deacon St. John, a biker who likes to ride through the zombie-ravaged world on his bike, looking for supplies and things to do. Since the game is open-world, you’re free to explore whatever you want, either following main story missions or doing side missions to improve your gear.

There are numerous camps and communities that you can visit to trade, rest, improve gear and much more. When it comes to the combat of the game, you can expect an unholy number of zombies to congregate around specific points, and there is no way you can gun down all of them.

Instead, you need to use the environment to your advantage, blowing up gas tanks and dropping logs on the hordes of zombies as they fun after you. There is a lot to discover in Days Gone, and it would be a shame if you were to miss it.

Prey was dubbed one of the best games of 2017 because of its unique concept and outside-the-box thinking. Here, you play as Morgan, a human who is stranded on a space station infested with a strange horde of alien beings.

These alien are shadowy shapeshifters that prey (hehe, get it?) on the people on-board, as well as you. You can use a variety of weapons to fend them off and eventually defeat them, similar to any experience you might have while playing any of the Dead Space games.

An interesting addition to the game is the possibility of gaining alien powers the longer you’re on the station, so you can augment yourself using a device that is much more uncomfortable than it should be. If you’re looking for a space survival game that gives you a chance to fight for your life instead of hide and hope for the best, Prey is a sound choice.

In Sci-Fi spheres, a technomancer is a mage that can influence technology using magical abilities, usually using them for their own benefit. This game follows your character, who is a technomancer during the War of Water, a war waged on Mars 200 years after human colonization.

Combat is a very large part of the game since there is a deep and complex combat system where you can choose between three skill trees. Each tree is massively different from the other two so there is something for everyone, regardless of your playstyle.

Each tree is concerned with some branch and usage of technomancy, so you can be as creative as possible. The world is also dynamic as it changes depending on the choices you make in the game.

That is something that you will have to see for yourself because it is such a marvellous mechanic that it is difficult to describe in words. Overall, The Technomancer has been dubbed a diamond in the rough by reviewers, but it is still a fantastic game in the Sci-Fi genre.

It is difficult to find games that fit so well with the general idea of Mass Effect as well as Deus Ex does. This series is futuristic and dystopian, set on an Earth that has seen its share of problems over the years.

Because of the cyberpunk setting, you can expect some fairly intense gameplay coupled with tough decision-making that can drastically change the outcome of the game, depending on what you want to do.

This gameplay mechanic is fantastic in action RPGs like this one since it adds a deeper level of player involvement and immersion. When it comes to the story, the Deus Ex series is all over the place in that regard.

All of the games are loosely connected and each of them deals with a certain problem in the world at the time. From nano-viruses to threats or Armageddon, you have it all in Deus Ex. Consider picking this classic series up no matter which games you’re looking for at the moment.

This game isn’t an action RPG as much as it is a survival-horror game set in space. However, it shares some common themes with Mass Effect 3, even to the point where you can get the iconic N7 suit in Dead Space, as an easter egg.

This game can be considered one of the all-time greats when it comes to immersion and level design. You play as Isaac Clarke, an engineer dispatched to the USG Ishimura, a planet-cracking spaceship that has lost radio contact with HQ.

Once you get there, your crew is attacked by monstrous mutated humans, cutting you off from everyone else. By utilizing the various mining tools you find on the ship, you are supposed to fend for your life while simultaneously looking for a way out.

On your way out, you will encounter a wide variety of alien monsters, some of which can be quite difficult to kill. The constant fighting and tight corners will remind you why this is one of the best games like Mass Effect 3.

Another Electronic Arts release, Dragon Age: Origins is very reminiscent of a game of Dungeons and Dragons, due to its dark fantasy setting. In this game, you play as a Grey Warden, an adept warrior whose race and faction you can choose at the beginning.

The end-goal that drives you to complete the game is the Archdemon, a creature of pure evil that intends to spawn malice in the world and drive it to ruin. From the character creation menu, you will spawn on a world that you can freely explore, choosing either to follow the main story or to complete side quests to gain more experience and better gear.

From what we’ve just said, it is fairly obvious that this game follow the classic conventions of the RPG genre, something that we’re looking for in the best games like Mass Effect 3.

Ghost of Tsushima came out in 2020 as one of the best-looking games of the year combined with top-notch gameplay that is extremely cinematic and satisfying. The setting is a war-ravaged Japan in 1274, where you play as a samurai who has been defeated by a Mongol horde.

Your goal is to recruit help across the island of Tsushima to help you defeat the Mongols and rescue your uncle from their grasp. The game is open-world, so you can go anywhere you want and engage enemies as you wish.

When it comes to combat, it is carried out in a similar way to Sekiro: Shadows Die Twice, where you can engage an enemy and carefully deflect their blows and outmaneuver them until they’re dead. The player character can also use bombs, firecrackers, and bells to disorient opponents as they encounter them.

Ghost of Tsushima is a perfect mix of combat, interesting mechanics, fluid movement, and fantastic storytelling that everyone should try out, especially if you’re looking for games like Mass Effect 3.

And that would be all for our list of the best games like Mass Effect that you should play. As you can see, the games vary wildly in theme, from medieval fantasy to even more Sci-Fi, but that just goes to show that quality does not have to be limited to theme, but rather how the game makes you feel as you play. All action RPGs are wonders to play, and we sincerely hope that you have found a new favorite game in this list. 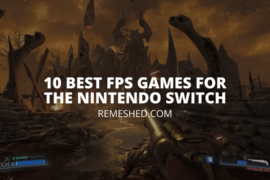